Back in the day, a dozen years ago, whenever I ambled into Snell’s of Alton they had a brand new Ducati 749R displayed on a podium. It was a compelling sight, deep red paint glowing radioactively under the shop lights and its carapace of forged alloy, cast magnesium and carbon fibre a blatant display of technoporn. I’ve wanted one ever since. It took a decade, but finances and time finally coincided and, after a two-year search, I came into possession of one of the 400 or so built in 2004 to homologate the machine for World Supersport.

For a variety of reasons though, my 749R has been  a bit of a garage queen since then. It’s never been my intention to put big miles on it – it’s a long-term keeper – but it’s been frustrating to see only a few hundred miles accumulated in nearly two years. Part of the reason has been time, part health-related and part technical. The first couple of rides I had on it were enough to demonstrate just how well set up the engine and exhaust are and to get a feel for what I needed to do to get the controls and suspension set up for me. And then it developed a severe and embarrassing-to-dangerous misfire. 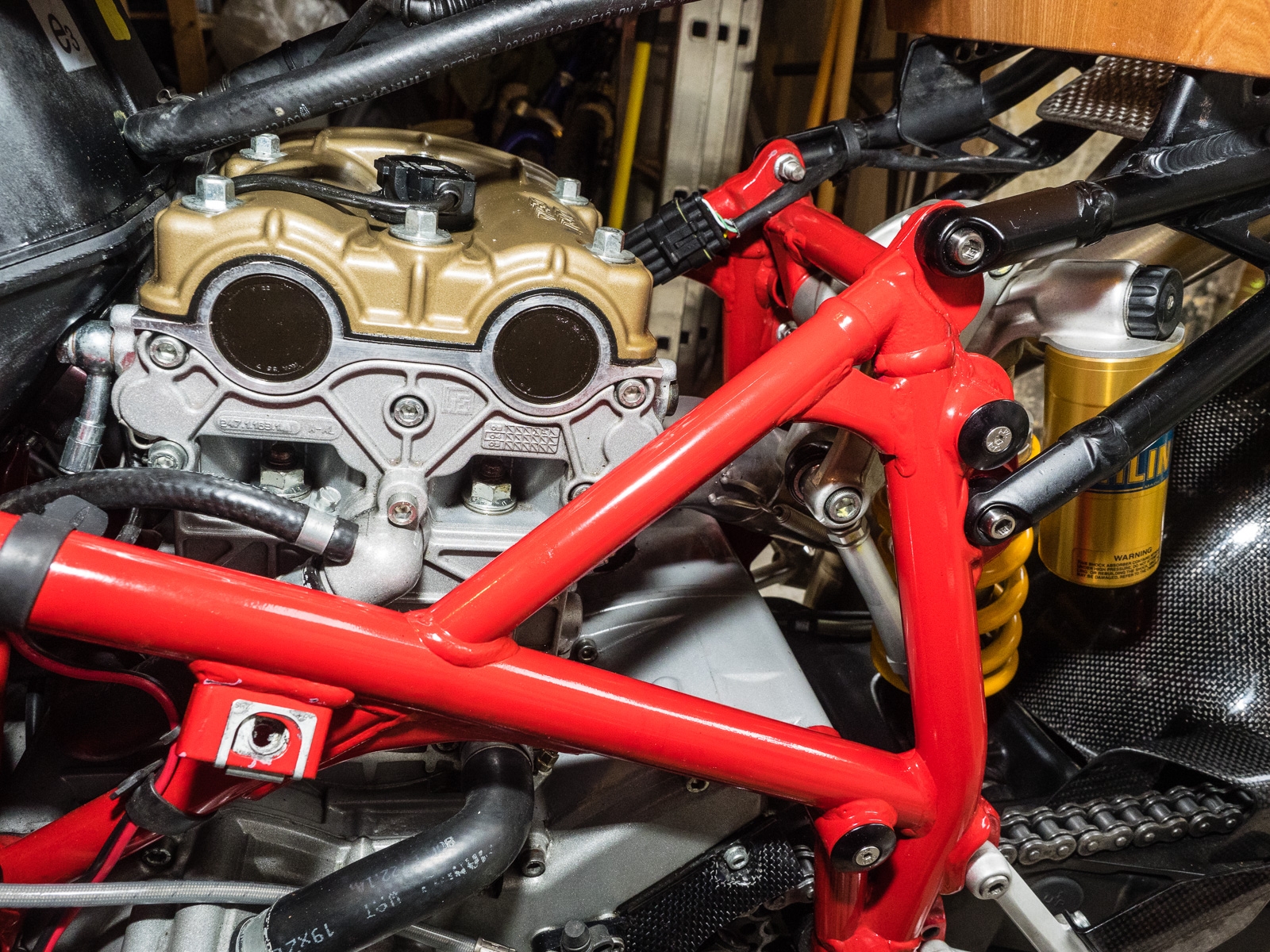 It also had a small oil weep from the rear cylinder, so I had put that on the list of stuff to be done, whilst I focussed on sorting the misfire. That turned out to be a mistake and a great argument for always holistically considering the symptoms that a device (or patient) may be presenting. As a long-time Ducati owner, I’d followed the usual diagnostic route: replace the ignition relay (cheap and easy), check the earthing (cheap but time-consuming) and then work up to checking the coil packs and spark plugs (easy but getting more expensive). Having pulled the coil pack from the front cylinder (which tested out just fine), I hit the first snag: the spark plugs on Ducatis of this era are recessed so far, in such a narrow well, that most plug spanners simply can’t get purchase, NGKs apparently being worse than Champions in that regard. I bought a thinwall spark plug spanner, which was fine for the vertical cylinder, but proved not to have sufficient clearance on the front wheel to work for the front cylinder – for that, I filed down the wall thickness at the end of the plug spanner from the bike’s toolkit, and used an extension bar to increase reach. 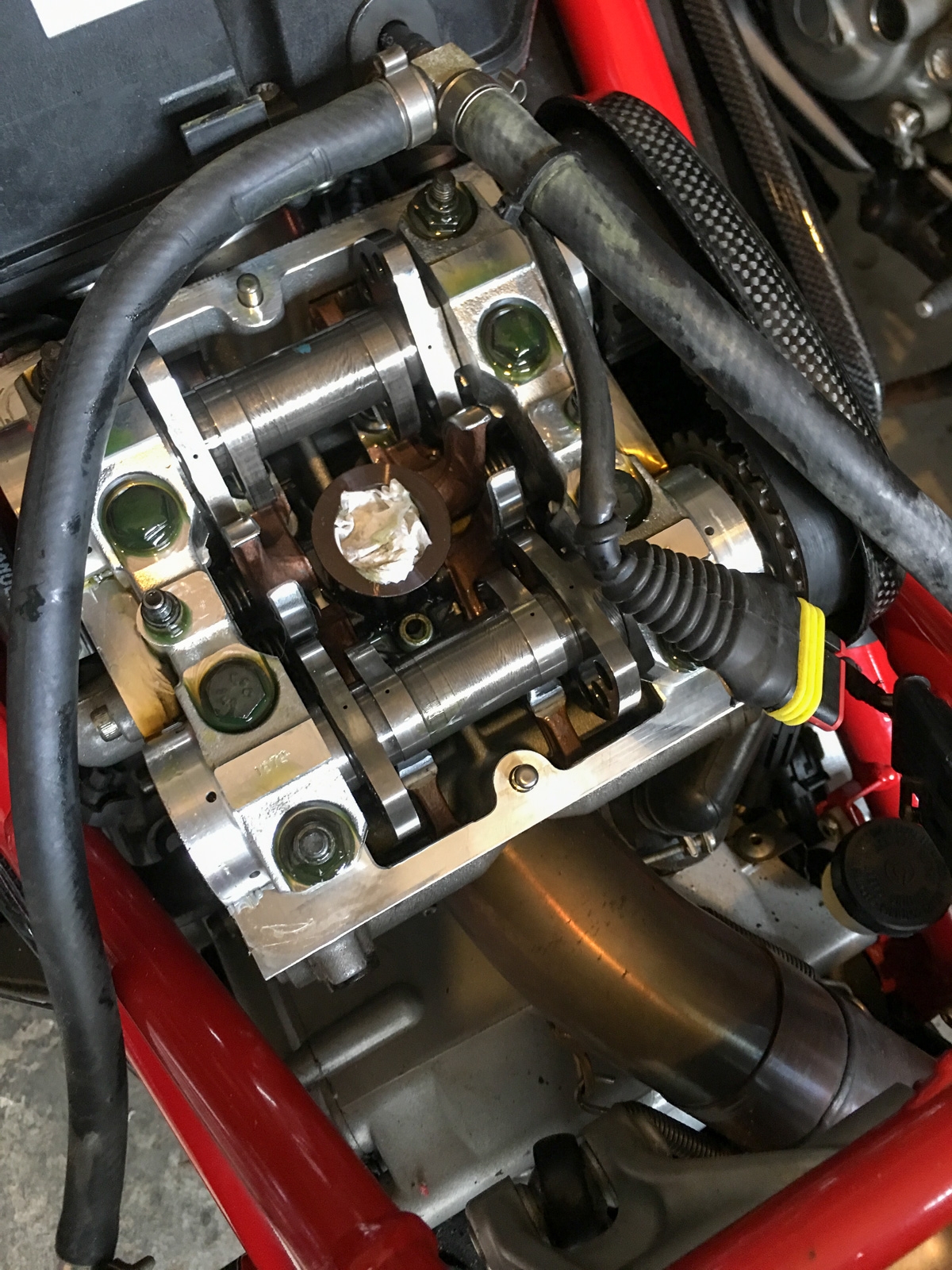 After getting nowhere with the misfire, I returned to the machine after several months and decided to have a go at the oil leak on the vertical cylinder. Petrol tank drained and removed and coil pack out of the way, I extracted the spark plug. To find it covered in oil. Peering down the plug well revealed that, until I’d literally pulled the plug and allowed it to drain into the cylinder head, it had been completely filled with oil. Very clean Motul 300V in fact. I know this because fresh Motul has a very distinctive translucent green colour and an equally distinctive soapy taste. And please don’t ask me how I know the latter. Now a spark plug operating in an oil bath isn’t going to have the best insulation in the world, so I dared to hope that the misfire was indeed related to the oil leak. I then removed the rather lovely cast magnesium cylinder head cover and it’s moulded rubber gasket and spent a couple of hours with WD40 and cocktail sticks, picking off the hardened bathroom grade silicone sealant that a previous owner or workshop had thought might address the same problem. I can pretty much guarantee that it had had entirely the opposite effect. Everything cleaned up, a bedding bead of Threebond 1215 was applied and the whole lot reassembled, torqued up (gently!) and left for 24 hours to cure.

New plugs were called for, just on general principles, so I looked online for the stock Champion RG59Vs. First of all, I went to a Ducati store. £24. Each. Plus VAT. I’ll note in passing that even Porsche charges ‘only’ £8/plug for a 911. I found it hard to believe that Champion would do a ‘special’ version of the RG59V purely for Ducati – the liability issues would be immense. So I went to an online marine engine store: £5. For the pair, including VAT and postage. Result: sailors clearly have less money and more sense than Ducatista. 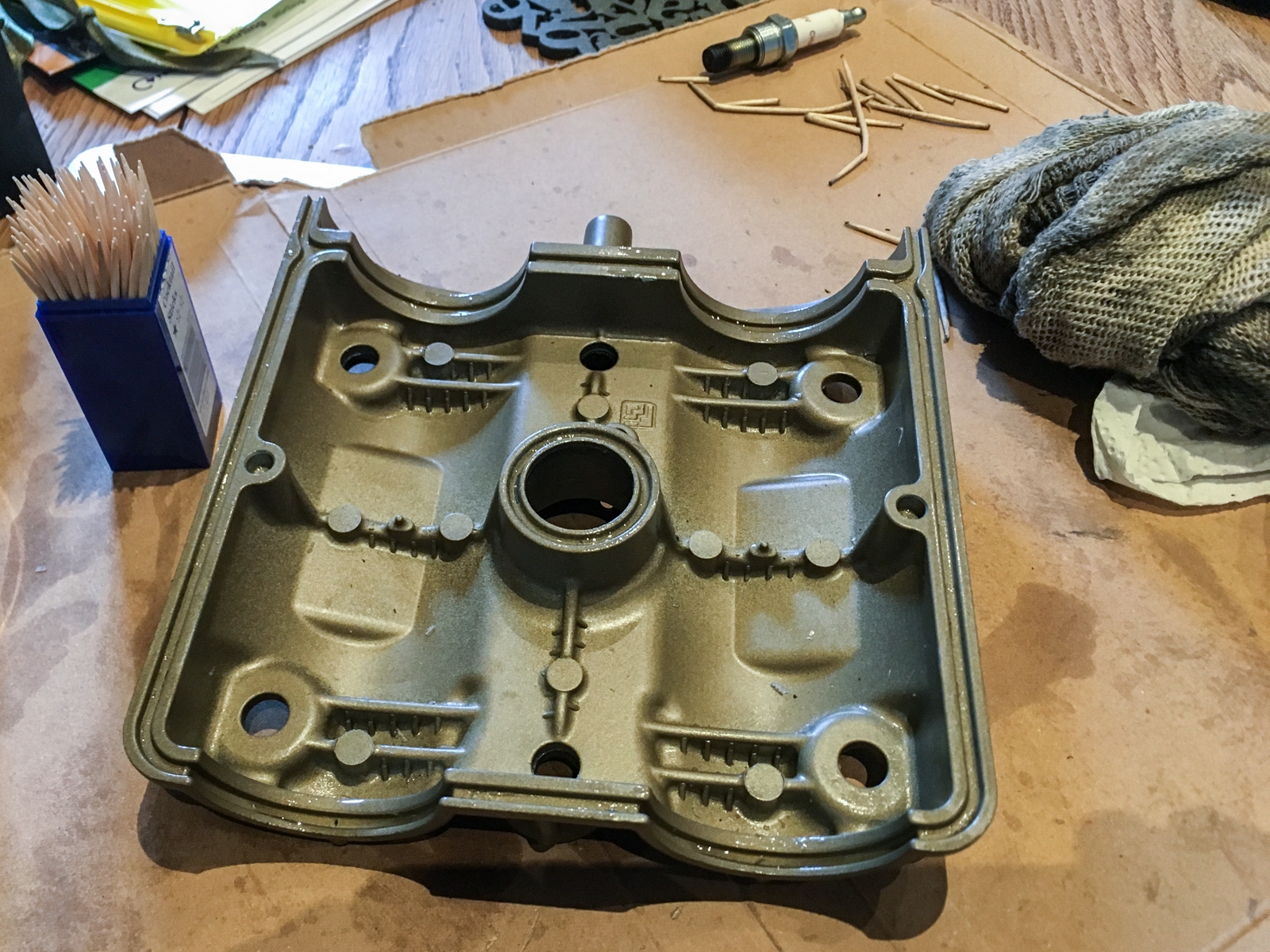 Everything back together, I filled up with 98 Octane (I keep a jerrycan of this handy as the nearest filling station that stocks it is 30 miles away), checked everything over, made sure that no bolts or washers were left over and hit the button. Bingo – it fired up on the first revolution and went straight to the slightly ragged but stable idle that is typical of the breed. Warmed up, a few blips of the throttle showed no trace of misfire and no sign of a returning oil weep. Misfires however often only show under load, therefore a trial was needed. So I went motocrossing with it. As you do. Given that the bike is neither taxed nor in possession of an MoT, I’m in the fortunate position of having a couple of km of private drive to test on, the downside being that it doesn’t exactly have a racetrack surface – sheep have been known to get stuck in the potholes. But a quick bum-off-the-seat blast did show both that there was no trace of misfire and that my fillings were pretty well secured.

The next task was to strip down the race’n’rattle slipper clutch, measure plate wear and stack height (which should be 38mm) and clean up all the plates to get rid of the nasty graunching apparent on engagement – that appeared simply to be down to lack of use – scrubbing each plate with brake cleaner seemed to do the trick. The final job was to swap the very lovely Ducati Performance billet footpegs with their upside-down race gearshift for the stock items. Less visually cool but much cooler than an accidental downshift under hard acceleration.

By now I’d got to the end of my task list, now needing only to make the thing legal, or as close as it’ll ever get.  Which proved unexpectedly tricky: my usual, old-school (for which read, ‘usefully deaf’) MoT testing station in Kippen had closed down, leaving only JK Motorcycles in Stirling in the area. As they’re off my Christmas card list, I looked further afield, finally booking in with Drysdale Motorcycles in Perth, an amusing 100 mile plus round trip away. I swapped my, ah, marginally-sized number plate for the VOSA-approved airbrake model and booked in. Come the morning, the 30°C temperatures of the previous day had given way to thunderstorms, torrential rain and pea-sized hail. I looked outside, glanced at the Pirelli Supercorsa SC1 tyres on the R (lovely tyres for a dry track but decidedly lacking in features considered desirable in a rain tyre. Like tread) and cancelled.

A couple of days later it all came together and I headed off, picking a route that was a fine balance of fun factored by being potentially able to argue to the constabulary that I was going ‘directly‘ to and from the test centre. My only mildly dodgy moment was, having pulled over to check directions, I realised that I was sitting directly outside Perth Police HQ, sans either MoT or Tax and with the R’s titanium 57mm Termignoni race exhaust rattling the building’s windows. How Ducati ever got this homologated, I will never know.

The machine sailed through its MoT though – deafness must be prevalent in the industry. In fact the MoT manual simply says, “With the engine running assess the effectiveness of the silencer(s) in reducing as far as is reasonable the noise emitted”, with failure being for, “A silencer that is in such a condition or is of such a type that the noise emitted is clearly in excess of that which would be produced by a similar machine fitted with a standard silencer in average condition.”. So it’s actually reasonable to argue that a race homologation special fitted with a factory exhaust and silencer (however laughable the term) is actually working in a reasonable and non-excessive manner for the machine. That’s OK then.

And then home. The A85 from Perth is a combination of long sweeping curves following the edge of the Highland boundary, with a sections of tight twisties alongside Loch Earn: ideal Ducati territory. So far, I’ve only got preload and damping roughly set up for me and, although the handling is scalpel-sharp and beautifully neutral, it will definitely benefit from having a chunk of rear ride height wound on, to aid turn in and side-to-side response. You can take this process a long way on a Ducati before it starts getting nervous and I’ve never understood why they always came from the factory with such an arse-dragging setup. That will make a big difference: this really was the last generation of Ducati where EVERYTHING is adjustable and where every change makes a difference. Even the short-travel  Öhlins suspension felt more oily-smooth than their semi-active cousins on my Multistrada.

And then there’s the engine. Oh, the engine… …it’s obviously had some serious TLC during its life and records show that the exhaust was set up with a remap by Wilf at Moto Rapido. This shows: the fuelling is perfect, roll-on smooth and grunty and the top-end a perfect segue from the thraaping mid-range bellow of a prowling Duke to the  high-rev howl of a hunting Sabre-Tooth. With such a responsive throttle, it has just the right amount of power to feel that you’re working the bike (the dyno records I got with the bike show a smidge over 130bhp at the back wheel) and enough performance not to feel remotely lacking, even after the less-subtle arm-dislocating roll-on of my Multistrada. This however is not remotely a machine for towns: yes, I’m a deal older than I was when I last ran a sports bike, but back and wrists definitely suffer below highway speeds, the exhaust is a real arse-broiler and the noise is actually embarrassing through towns and villages – enough for me to limit how much I use this machine. Third gear overtakes of tourist cars dawdling along with their windows down were, I suspect, incontinence inducing.

I’ve ridden many motorcycles over more decades than I care to (or indeed can) remember. This one is very, very special indeed and I’m starting to get quite addicted – I knew there was something calling to me from that podium at Snell’s. 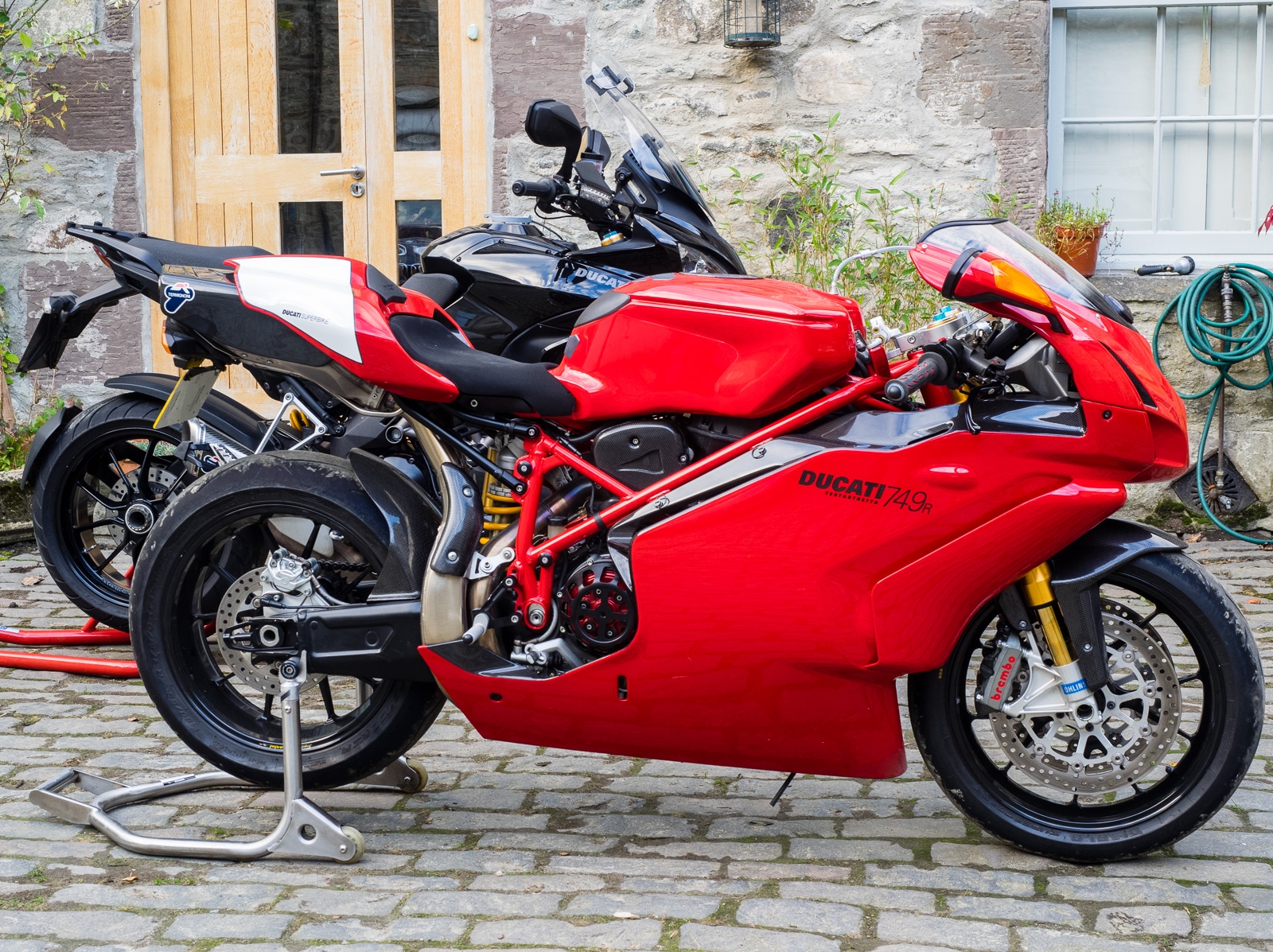