I’m a great fan of the smaller capacity Ducati sports bikes. I hold to the principle that a sports bike, like a sports car, is one with which you have to fully engage and whose performance should be exploitable – albeit with concentrated practice – on the roads or tracks on which you or I use it. That immediately disqualifies most modern litre-class sports bikes and and high-end sports cars – the combination of huge horsepower and software intervention that makes them ridiculously capable in the hands of riding and driving gods on the Nurburgring simply frustrates us mere mortals who are (usually vainly) trying to get them to a place where they can be bothered to wake up and take an interest.My first bike on my return to motorcycling was a Ducati 748 and, despite having since ridden examples of all full-fat Ducati sports bikes made since then, I’m still enamoured of the balance of power, handling and usability of this machine and its ilk. OK, so the current ‘small’ Ducati sports bike – the 899 Panigale – puts out 150bhp – more power than ANY road-going Ducati built prior to 2007 but, relative to the axe-murderer 1199 Panigale, the principle still applies.I’m also (he mutters, sotto voce) a closet fan of Pierre Terreblanche, Cagiva’s and then Ducati’s iconoclastic head of design (for car buffs reading, he’s the Chris Bangle of the motorcycling world) from 2001-2007. Terreblanche had the challenge of replacing the iconic 916/748 range and it is to his credit that he did so by taking a radical, clean sheet design for the 999/749 that launched in late 2002. The subtle curves and stacked headlights of these machines gave them a vaguely Cyclopean air and, whatever the ‘design’ and functional merits of these bikes, they were relatively unsuccessful in the market – the conservative world of motorcycling voting them too much of a departure to be acceptable. It’s a shame, as they handled better than their predecessors, were more comfortable, had improved and adjustable controls and updated instrumentation, plus a plethora of fine (and no doubt expensive) design details that make them a pleasure to behold and to work on.The launch of the 1098 in 2007 marked a return to a much more evolutionary approach to the design: if you sit a 916 and a 1098 side-by-side, the latter looks simply like the next step along the road, and the Panigale likewise. Put a 999 or 749 in the lineup and it looks like an alien interloper.I’ve always thought however that the styling of the Terreblanche machines would age well, whilst the later machines simply feed the short cycle of rapidly obsolescent design. With his early machines now more than a decade old, that view stands and the world does at last seem to be starting to appreciate them more.Back to me, then: It’s a source of mild embarrassment that I’ve not owned a Ducati sports bike since selling my 748 in late 2002. It was also my last red Ducati and, although I’m old enough to remember a time when red wasn’t the default colour for any Ducati, it is now and, I suspect, as irrevocably associated with the brand as it is for Ferrari. 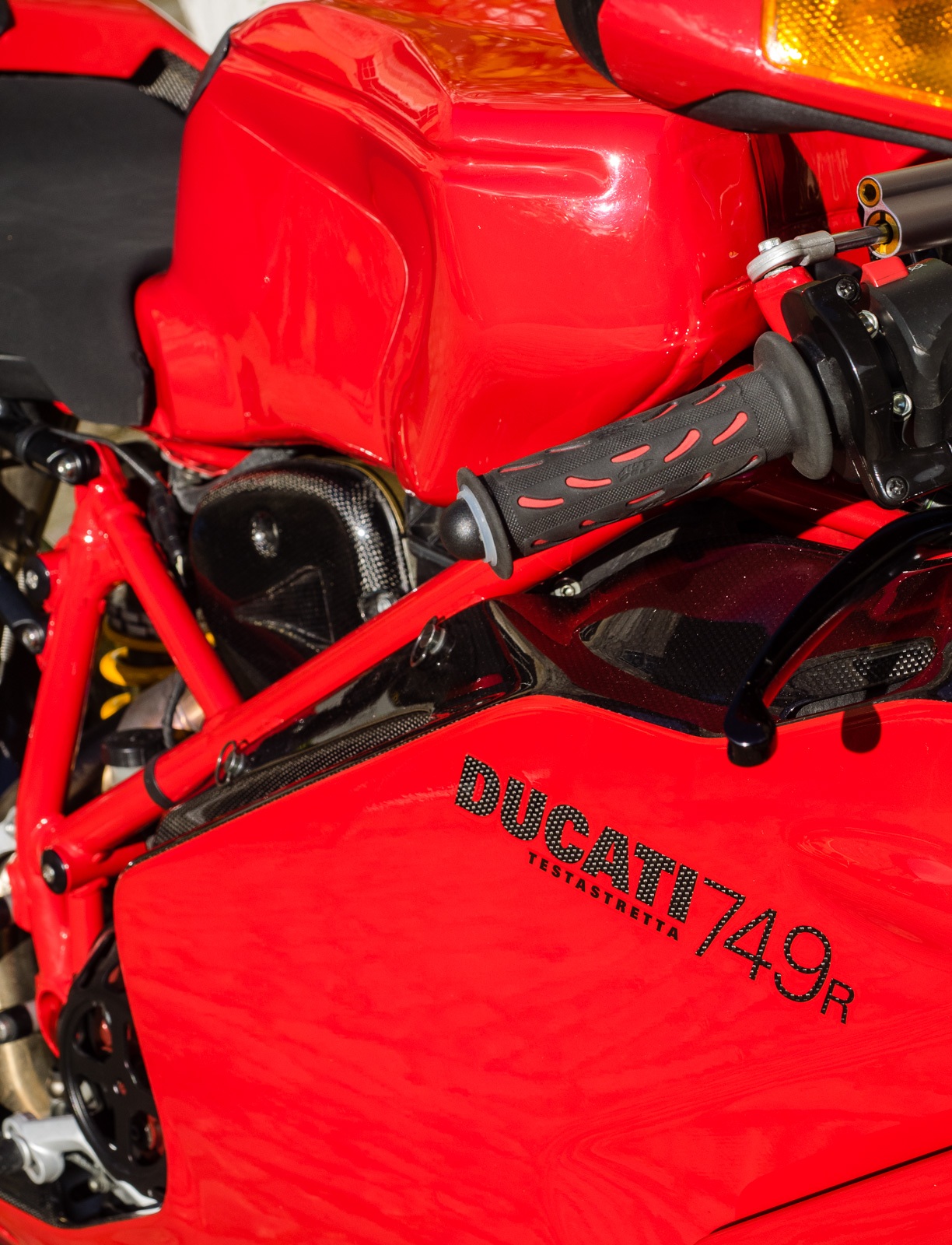 So it’s time to play: and, if you haven’t wandered off in search of cute kitten pictures, you’ll have worked out that I finally have added a red Ducati to the stable, of smaller capacity and a Terreblanche design to boot. And this is the one I’ve always wanted – the 749R – Ducati’s World Supersport homologation special.Where World Superbike racers are less constrained in allowable changes to engine and cycle parts, World Supersport is far more governed by rules, largely in an effort to be seen to be racing machines that are closer to those that we punters can buy from our local showroom. Ducati of course turned the rules on their head, building a full race bike of titanium, magnesium and carbon fibre and then, by adding lights and an attitude, selling it as a road bike. They probably didn’t even bother to try and keep a corporate straight face. So, of the two homologation specials of the time, the 749R is a rather more exotic beast than its 999R stablemate: it introduced the deep section swing arm that later become standard across the range (and, IMHO, is far more purposeful-looking than the previous alloy banana), had titanium con rods and valves, magnesium head covers and, for the launch year of 2004, very lovely and very, very expensive carbon bodywork.And it’s one of those that rocked up our drive on Saturday – one of the original 2004 machines, obviously lovingly cared for and with just the right level of tasteful modifications – ie the ones that I’d have made anyway. Only 7500 miles on the clock, all service records intact and with all original parts ready for a time when it may (or may not) become a rising classic. 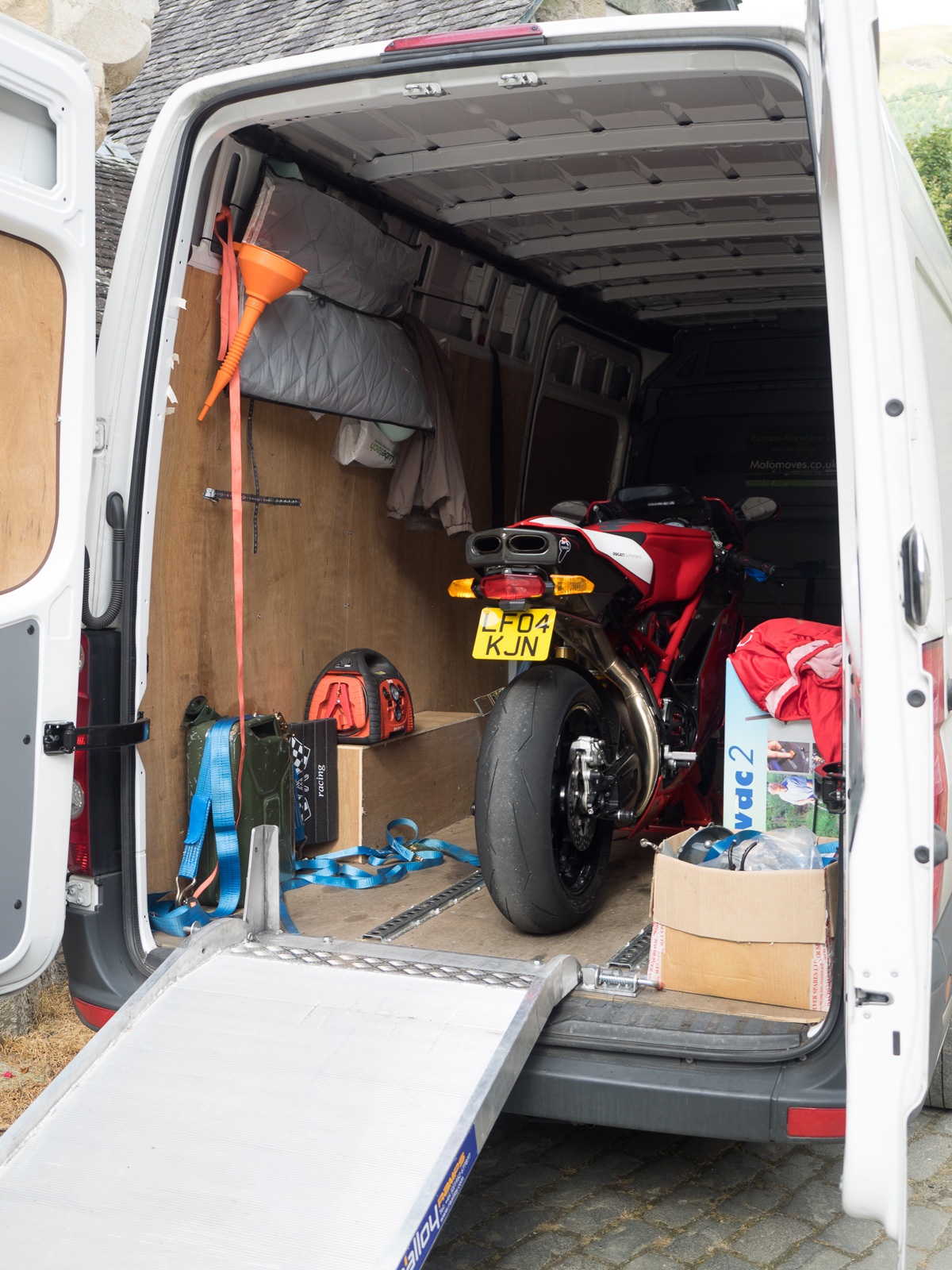 I’d been looking for months – although about 1200 749Rs were made over the four years they were in production, only about 400 worldwide were the more desirable 2004 model with the carbon – mine is #278. I’d looked at bikes as far afield as Vilnius and Turin – the latter nearly got the deal, despite turning out to have been raced in the 2005 Manx GP, but Ducati Torino managed to ‘lose’ the now unobtainium and entirely obligatory Termignoni exhaust that came with it, so the deal was off. The few others (probably about half a dozen at any one time) on the market fell into the categories of thrashed race/trackday bikes – honestly declared or otherwise, pampered garage queens and a few well-used but properly cared for and honest bikes, usually with a higher mileage. And that’s no bad thing – Ducatis thrive on being used hard and serviced religiously. Mine (as far as my due diligence can tell) falls between the latter two categories: it’s actually got a higher mileage than several I looked at, but has been well cared for and properly documented.Having agreed the deal in principle by Internet and phone, I drove down to Shropshire last week for an inspection, found the machine to be exactly as described and did the deal. I then called the shipping company (motomoves.co.uk) that I’d planned to use for the Turin bike, to ask if they did transfers within the UK. It turned out that not only did they do so, but that he was at that moment sitting outside Worcester waiting to do a pickup, about thirty miles from my purchase and with a spare slot in the van. A short detour and, 24 hours later, I was drinking coffee in the courtyard and watching my 749R gleaming in the late summer sun.Too late for a ride out, I spent the evening checking tyre pressures, adding the tax disc and generally checking the beast over, before introducing it to its garage companions. It didn’t emerge the following morning with a black eye, so I guess all went well. A beautiful Sunday morning made a shakedown run to The Green Welly an inevitability, not least to allow me to get used to this bike’s race shift pattern, its “one up, five down” shift being entirely the opposite of every bike I’ve owned since selling my Royal Enfield in 1978. So muttering the mantra, “down for up, up for down” to myself, I lurched off up the road – the high race gearing requiring some real old-school clutch slipping to get going. Getting out of our glen is purgatory on a sports bike – travelling too slowly for wind pressure to take my weight, wrists, neck and knees were creaking by the time I hit the main road, reminding me just why I changed to sports tourers a dozen years ago.Working my way gently up the rev range gave me a very welcome surprise: this particular machine is fitted not with the ‘standard’ asymmetric Termignoni half-exhaust system, but with a full 57mm race system. Now, normally, fitting such a meaty exhaust to a smaller sports bike for road use is a recipe for lumpy running and an anaemic mid-range, but Internet mutterings have it that this exhaust suits the 749R – and only the 749R. It had also originally been set up and the ECU reprogrammed by Wilf at Moto Rapido in Winchester, an outfit with a reputation for knowing their stuff. Which is exactly what turned out to be the case – the bike pulling cleanly and well throughout the rev range (or as high as I took it on a first run). Delightful. It doesn’t have the visceral and instant torque of my Multistrada 1200 (which, given the latter’s 60% capacity advantage, bloody well ought to be the case) but it does have exactly what I want in a sports bike, which is sufficient low and mid-range torque to make life relaxing when you want it to be and a howling top-end accessible with considered and co-ordinated use of the twisty and proddy bits.

The suspension and geometry, despite being entirely not set up for my preferences and weight, are clearly of the highest quality, although it doesn’t take much for the Öhlins suspension to run out of travel at the rear, with a few of the more lumpen bits of the A85 firing my feet off the foot pegs. I put that down to the linear race suspension linkage unique to the 749R, which gives wonderful feel and control over small suspension excursions, but which really isn’t designed for Scotland’s motocross tracks masquerading as public highways. That I will just have to live with.The tyres are nearly new Pirelli Diablo Supercorsas, a track tyre with but a marginal nod to road legality. In the warm and dry of yesterday, they felt magnificent, but I know from past experience that they handle like a dog on ice in cold, wet conditions. Those are not however conditions in which I will intentionally use this bike, so they’ll stay on, for the time being at least.So now it’s on with getting the suspension and controls set up to suit me and resisting the urge to put way too many miles on it in what remains of the Summer and Autumn. The distant noise you can hear is my chiropractor warming up. 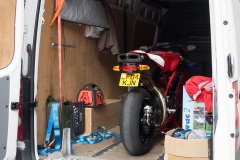 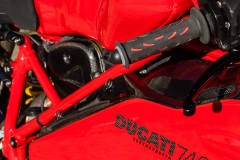 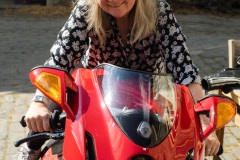 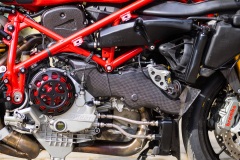 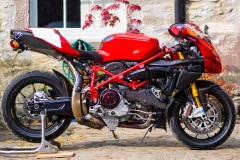 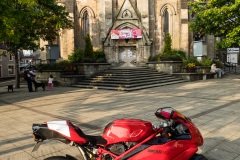