So, in changing both how we live and what we do, and after trying out pretty much all of the alternatives, we’ve bought a Tesla – a Model 3 Performance – and this, after six weeks and 2,000 miles is a real world review of just how well reality matches both hype and expectation.

If you’re even mildly interested in electric cars, you’ve probably been exposed to numbingly tedious videos of Teslas blasting down drag strips, crushing the bellowing internal combustion-engined (ICE) opposition in imperious silence. That part of any Tesla’s performance we can pretty much take for granted, and the Model 3 doesn’t let us down. Ours – and the only Model 3 variant I’ve driven – is the Model 3 Performance, which covers the traditional 0-60mph measure in 3.2 seconds, the more real-world relevant 30-70mph increment in around 2.7 seconds and a standing start 1/4 mile in 11.5 seconds.

For reference, those acceleration figures are in the same ball park as those of the hallowed superstars of the 1990s, the Porsche 959 and Ferrari F40, but from a zero-emission family saloon. Yes, a high-end ICE sports car will catch – and ultimately despatch – a Tesla at the top end, but there we’re talking about 130mph+, which isn’t entirely relevant to day-to-day driving, whereas low-medium speed responsiveness most certainly is. The Model 3 then, is not a slow car.

The Performance model also comes with the occasionally optional (Tesla change their minds on standard spec at about the same frequency as the rest of us change our socks) Performance pack. That adds 20” wheels (with the added liability of 35-profile tyres), four pot red Brembo calipers, a small carbon fibre rear spoiler and a software Track Mode, the latter to be deployed for the purposes of hooning around race circuits. 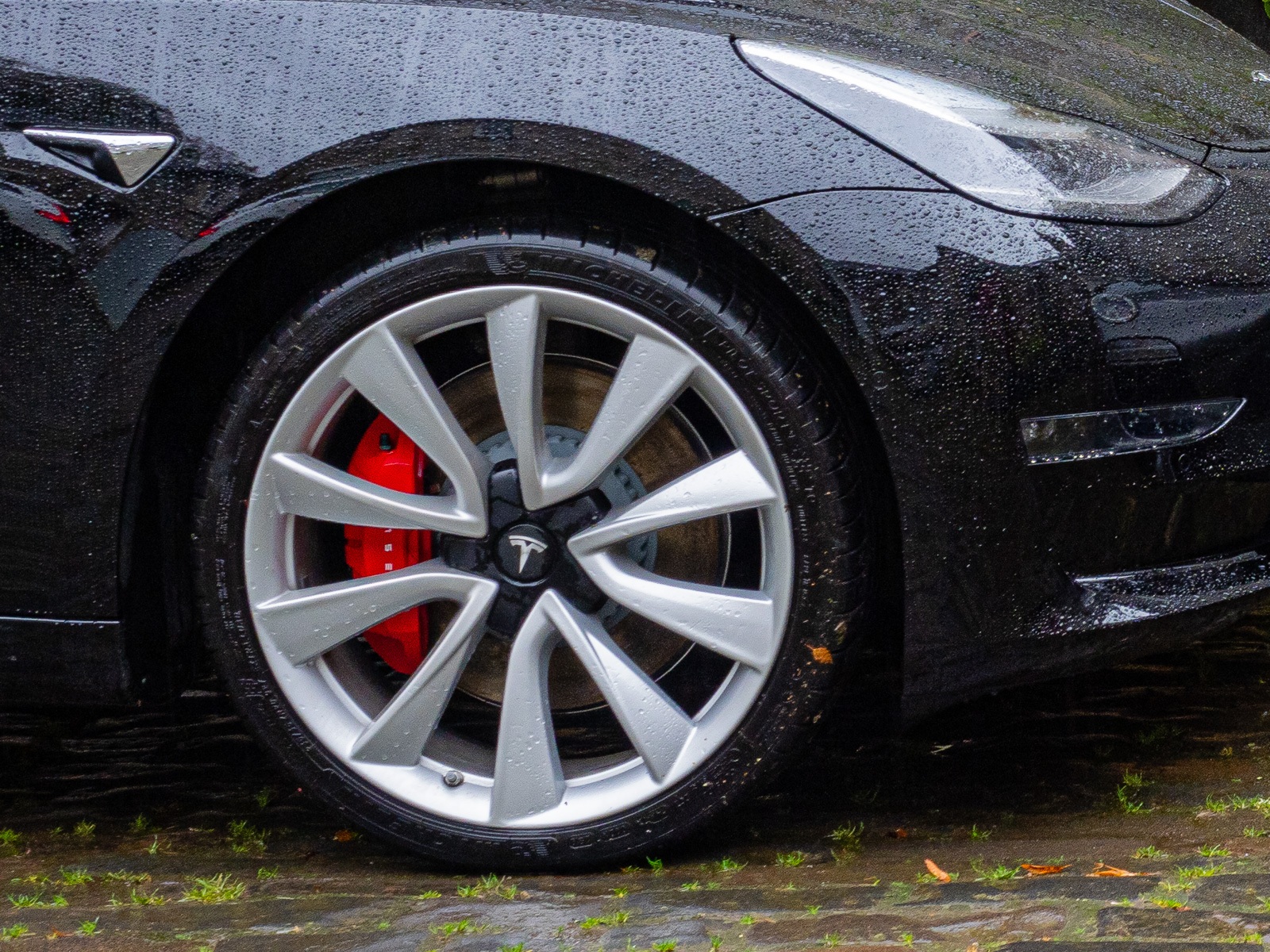 All of that channels the output from a pair of electric motors – a 211kW permanent magnet switched reluctance motor at the rear and a 147kW induction motor out front, shovelling out between them 353kW (480ps) and 639Nm of torque. [Update: since I wrote this, there’s been another software update to the vehicle’s power output: it now shoves out something over 500bhp and runs 0-60mph in 3 seconds dead]. The dual motors of course drive all four wheels, with the car’s software taking care of traction control, torque vectoring and vehicle stability. Put all of that together and you’ve got the reason for the frankly implausible acceleration that a 1900 kg car delivers, along with the potential for a maximum speed of 162mph (insofar as that’s relevant).

But what of the actual experience of driving the thing, in the mixed environment of the real world? First things first: this does what most EVs do from a standing start: it simply disappears. It doesn’t matter if you’re in a Nissan Leaf, an i3 or a Tesla – stepping off the line, they’ll show a clean pair of heels to pretty much anything else, and will do so with the lack of fuss and histrionics that comes from electric motors having maximum torque at zero rpm. Useful, as long as you’re not next to a boy racer, in which case it’s best to just let them get on with it. Except when you choose not to.

At higher speeds, the responsiveness of most EVs does start to tail off. Not so much the Model 3. At any real-world speed, serious application of throttle results in an instantaneous change in speed with no apparent intervening interval, and with none of the usual cues of noise and vibration. I have never driven a car that makes it easier to overtake on country roads or which can more effortlessly cause passengers to re-evaluate their relationship with their stomach contents: it is genuinely worth warning people before using the car’s performance – the overtaking performance is closer to that of an on-song superbike than a car.

All of that means that you’re eventually going to want to slow down. And here, I love the regenerative braking of EVs – its something that lets me drive like I ride my motorcycles. If you haven’t already grasped this, I’m a long-term Ducatista – bikes whose high-compression v-twin engines make for off-throttle engine braking that is equivalent to slamming the brakes on on other machines. It also suits my IAM training – my preference being to use brakes where they’re needed, but focus the rest of the time on throttle sense from forward planning to arrange to be at the right speed, in the right place at the right times. The Model 3 has two levels of regeneration selectable. So far, I’ve left ours in high. The only downside I’ve found to the Tesla’s regeneration is that it tapers off at very low speeds, meaning that, to come to a full halt, you need to tap the brakes for the last few mph. I’d like to have a setting that kept regeneration in play right to a halt, pretty please, so that we have a full ‘single pedal’ driving mode [Update: another software update has fixed this – full single pedal driving to a halt now works very nicely].

One safety ‘feature’, mandated by UNECE, requires that any regenerative braking system must show the brake lights when the deceleration generated is greater than 1.3m/s2. So, from the inside, you’re driving smoothly and purely on forward planning and throttle sense. From behind though, you look like a panic-stricken learner on their first encounter with roads that aren’t ruler-straight. That does annoy me, and I’d really rather like to be either able to switch it off or have a rear-facing display that says, “It’s not me, it’s the car…”.

The actual friction brakes have a slightly wooden feel, but they’re firm and linear in their action, although I suspect that ours aren’t fully bedded in yet, and may never be – I doubt we’ll ever really use them outside of emergencies or race tracks.

So we’ve got speeding up and slowing down sorted, so how about the ‘going around corners’ bit? Whatever else, this is a modern, state-of-the-art car, so it corners very predictably, starting with mild, consistent but determined understeer. It also has a 48/52% front/rear weight distribution and all wheel drive, so it’s inherently unlikely to be responsive to playing with its balance on throttle or brakes.

It has a very fast steering rack: a mere 2 turns lock-to-lock means that turn-in is very sharp and crisp, but it manages to achieve that without any nervousness around the straight ahead position. The steering is not hugely feelsome but is very precise, with three weightings, all perfectly usable and nicely judged. I spent some time in Sport setting, found it a little heavy and dead for my tastes and have now reverted to the Standard setting.

Once settled into a corner on constant throttle it is absolutely stable. It will tighten its line usefully on application of the throttle, but the overall feel is neutral and ‘safe’. But then I am coming from a rather rear-biased 4×4 and the ultimate adjustability of an RWD 911. Grip, from the four 235/35 section Michelin Pilot Sport 4s’ is apparently unconditional – the one time I felt that it was starting to think about breaking away, it appeared to be considering a completely predictable four-wheel drift with no change in attitude. But it never actually let go. I haven’t had time to try out Track Mode yet.

Before we took delivery, we were definitely concerned about the 20” wheels, low profile tyres and lowered (by 10mm) sports suspension, especially when presented with our kilometre of off-road drive and potholed Highland roads. No need to worry – the ride quality is beautifully judged, being firm but supple and with no particular crashing over hard-edged ruts. And body roll is nearly non-existent. The ride quality is actually better than than of its predecessor with us, a BMW X5 on 19” wheels with non-runflat tyres.

The fast rack, the low centre of gravity of the battery pack and the car’s firm suspension mean that it is very agile for a heavy car, but you do become aware at times of the slight contradiction between the speed of the steering and the simple fact that you’re trying to get a large mass flicked very quickly from side to side in a sequence of tight twisties. Near us there is one section of road that specialises in having significant crests at the apex of tight bends, where changing direction by necessity as the suspension unweights can cause many cars to explore the outer limits of their stability, and not necessarily in a good way. With the Tesla, you just feel the slightest feeling of the suspension lightly topping out as 1900kg of inertial mass reverses direction. The car doesn’t remotely try to corkscrew or step out – you’re just made aware that you’re running towards the limits of its design brief. Most other stuff I’ve taken down that road at any speed however has got itself far more out of shape at that point. The Model 3 is marginally outplayed by the i-Pace there, despite the latter’s extra avoirdupois.

In summary then (the TL;DR bit), the Model 3 is a safe hoot to drive: it combines exemplary stability, sharp handling and a well-calibrated and sophisticated ride with a quite ridiculous level of performance. As an EV driver’s car, it’s really in a class of only two, the other being the Jaguar i-Pace (this was written before the Taycan was released). And both are so far ahead of the ICE herd that any comparison is akin to comparing a horse buggy to a rocket ship.

Because the performance of the Model 3 is ridiculous, accessible and delivered in near silence, it’s very, very easy to find yourself travelling at speeds far beyond your own expectation – I’m coming from a long history of high-powered bikes and cars and the Tesla still takes me by surprise at times. If you’ve never been through an advanced driving course such as those of the IAM, RoSPA or the High Performance Course, I strongly, strongly advise you to do so, because the Model 3 – like the original Audi Quattro and the Subaru WRX – creates a step change in the accessibility of a new level of performance for a given price. I’d also recommend getting used to the car with it in Chill mode: this, by restricting it to around 205bhp, makes it merely nicely brisk rather than insanely fast.

Up next: Part 2 of this review will cover Range and Charging, Part 3 will move onto the autonomy features of the Tesla and Part 4 the Controls and Interior.