The week’s order time turns into a 10 day wait. Not too bad, but one final decision to make — colour: choice between Ferrari Rosso (in the finest Italian tradition) or luminous yellow. Dithering but veering towards the yellow when Jane spotted a yellow 748 and declared that she wasn’t going anywhere, any time, on a flying banana. Red it is then, dear…

END_OF_DOCUMENT_TOKEN_TO_BE_REPLACED

Two great machines — one fun, practical and approximately sensible; the other fun, impractical and insane. A quick reference to first principles and it’s no contest — insanity wins every time. So it’s the 748 for me. Now for the fun bit — the dealing.
The 748 lists at £9400, £9750 on the road. A UK-spec parallel (or a parallel fully converted to UK spec) is around £8500 on the road. The very cheapest import I’ve seen was at £7900. Quite a difference.
Looking at the cheap parallels reveals however that they invariably don’t have the headlights and clocks converted to UK spec and that everything is extra. More realistic is to make a comparison with a full-spec. parallel against the official machine.
It’s also very much worth remembering in negotiation that it’s much easier for a dealer to throw in extras at their marginal cost, resulting in a better deal for you as the punter who pays retail prices. I was after a Spyball Alarm/Immobiliser, Datatag coding, a factory paddock stand (essential on a machine that’s only got a sidestand, even if the only maintenance you’ll do is lube the chain) and a decent lock. Total retail (including fitting) on that lot was about £650.

END_OF_DOCUMENT_TOKEN_TO_BE_REPLACED

Having decided that Pegasus in Reading were to be my chosen victims, time for them to put their money where their mouth was, before I’d do likewise. So it’s a quick phone call — “Hi, remember me? – I’m the guy who got lost getting to you last week, turned up 2 minutes before you closed, parked on the pavement and kept you half an hour talking about Ducatis”. And rather than simply put the phone down and emigrate, they came back with “sure, and you’d now like a test ride, right? No problem, what would you like to try?”
Back to the sensibility versus desire thing — I’m a returning biker after many years layoff, so surely best to start with something at the sensible and less intimidating end of the range — a Monster? 900 or 750ss? Nah — been there, done that – want a faired bike and my old Pantah had pretty much the same engine in the early eighties. So that leaves the semi-sensible — the ST4 sports tourer and, of course, the insane — those design icons of the hypersports world, the 748 and 916.
Now the ST4 has the 916 engine and the 748 has essentially the same chassis as the 916, so the obvious thing to do was to test ride the ST4 and the 748 and if I liked the engine of one and the chassis of the other, then the answer would be a 916. Easy — Logic 101. But would they do it? “No problem — come along Saturday, and we’ll have PDI’d one of each for you to try”. Erk – so not only was I going to have to risk making a complete fool of myself in public but was going to have to do so on brand new machines with precisely no miles on their clocks — falling off would be double plus ungood.

END_OF_DOCUMENT_TOKEN_TO_BE_REPLACED

So what did I get? Patience — that too will be answered. First off, time to get some new kit — too much mildew in the helmet (I also have a nasty suspicion about what the cats had been using it for) and a 16-year-old baggy Belstaff isn’t really going to cut i t on a leading-edge modern sports bike.
When I were a lad, full leathers were a fetish item, and not something to be worn in public unless you were either Mike Hailwood or Tim Curry. Now they’re sensibly de rigeur, along with enough body armour to fulfil all my old Dungeons and Dragons fantasies. Fair enough, who am I to argue?
So the question is, one-piece suit or jacket & trousers? One-piece race suits look very good. If you’re racing or doing a lot of track days, they’re probably the best protection you can get. They’re also expensive and less flexible if (say) you want to wear a winter jacket instead of the top. Suits also, if you’re buying off the shelf, assume that you’re a certain shape. That’s where it all went pear-shaped for me, particularly with the fine Italian stuff — Dainese and Spyke — that I liked — if I found a suit that fitted across the shoulders, I had room in the trousers for a small marching band (but let’s not follow that train of thought. Really). If it fitted in the leg & waist, I found I was doing a passable impression of Charles Laughton at his finest. I didn’t have time to think about getting a suit made, so went for the mix’n’match jacket & trousers.

END_OF_DOCUMENT_TOKEN_TO_BE_REPLACED

This is where we go back to square one —  one reason for buying a bike now, rather than at any other time in recent years. Easy one — they’re cheaper now than they’ve probably ever been. So why’s this, when nearly everything else in the UK is a gross rip-off? Dedication to the cause and enlightened self interest by the manufacturers and importers? Do me a favour — it’s all down to dear old Adam Smith, as interpreted by the EU.
After years of UK market prices being fixed by manufacturer’s cartels, the EU single market has now made it illegal for manufacturers to stop people buying the vehicle of their choice in any EU country. That of course hasn’t stopped them trying to get out of it — just ask Volkswagen what their recent 100M+ Euro fine was for. In the case of the UK, they usually use the need to supply a right-hand drive car as the reason for either not supplying or delaying the supply of a car. That barrier of course doesn’t apply to motorcycles — they are easily transportable and, most importantly, there’s no major conversion (lights and speedos only) required to suit them for the UK.
Given that motorcycle manufacturers and importers continued to hold their UK retail prices at 30-40% higher than the mainland, the last few years have seen an enormous rise in the number of independent dealers supplying parallel imports. Other than minor spec differences, including the Euro-voluntary 100bhp restriction, these machines are pretty much identical to an officially imported model, only way cheaper.
The upshot of course is that, with their market under increasing pressure, the major importers and manufacturers all cut their list prices dramatically in late 1998 or thereabouts. Since then, the sticker ‘premium’ for an official machine has shrunk to perhaps 15%. As I’ve found however, that’s only the start of the story — everything is up for negotiation.
So what’s missing if you go parallel? Depends on who you go to — there are parallel dealers who appear out of a backyard, bring in few bikes in crates, dump them on naive or greedy punters and vanish back into the mire whence they came. There are also parallel importers who care about service. Most manufacturers won’t honour pan-European warranties on machines bought in countries other than where they were originally supplied, so parallel warranties are usually provided by insurance policies, which don’t always offer the same level of cover as a full manufacturer’s warranty.
All things considered, a decent parallel dealer should be no better and no worse than any ‘official’ dealer. Unfortunately, that doesn’t say much — there are enough horror stories around from official dealers to base the parallel/official choice on reputation and direct experience rather than simply which camp they fall into. So, in the interest of adding to the overall body of knowledge, here’s my own experiences:

END_OF_DOCUMENT_TOKEN_TO_BE_REPLACED

Am I for Real?

Many who know me would argue (or hope) that I’m a figment of a particularly diseased imagination. “Enough already!”, I cry — this isn’t about my existence, it’s about whether I really want to get a bike again after all these years, or whether I’m just being a sad git in search of the illusory joys of a previous decade — liking the idea rather than necessarily the execution. If I get it wrong, it’s expensive. It’s also about being able to pitch up a dealer for a test ride without looking like a panicked gopher.

END_OF_DOCUMENT_TOKEN_TO_BE_REPLACED

All stories should have a beginning — here it’s 1977, and my first bike, a 1958 Royal Enfield Crusader Sports, 849 EBB. Bought in a box and several paper bags for £80 and rebuilt over the summer of 1976 by myself and my father, this was my transport through my second and third years at University. Sold in 1978 to fund an expedition to Africa, it was briefly seen in about 1988, putting down Princes Street in Edinburgh, pursued by myself on foot, with a cry of “Come back you bastard, I want my bike back!!” 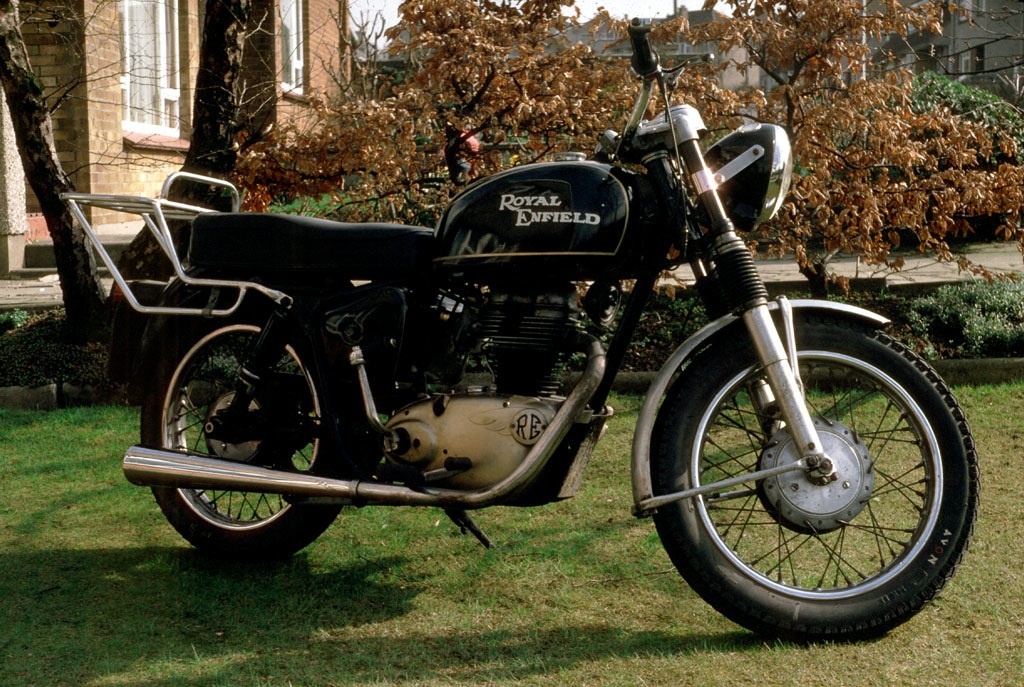