7:30 on a Sunday? Sorry, does not compute. But my phone is binging cheerfully at me, the little sod, a cat is asleep on my head, beloved is a whiffling heap under the duvet and I’m struggling with the concept of needing to be vaguely functional in the next twenty minutes and on the bike in a hour. The intervening time is spent knocking up bacon butties and coffee for self and Fiona, the proprietor of the famed Green Welly Stop, as she drops in en route to Tulliallan for today’s Scottish IAM Motorcycle Forum meeting. I’m worried though: TGW does totally excellent coffee and I need to ensure I’m on decent form to repay the hospitality.

Coffee quaffed and butties snarfed, we thread the bikes through the potholes of the motocross track that masquerades as our drive and nearly ride in formation into the fence on catching sight of the morning beauty of the cloud-strewn Braes. We recover to swing out of the glen in manner smooth and confident. Or at least we would have, had either of us been able to see where the hell we were going: with the temperature at 3°C and surrounded by low-hanging mist, the dew point was just waiting for a couple of motorcyclists to offer their visors up for the purposes of condensation. My visor steams up on the outside, the inside and – worse – between the pinlock insert and the visor itself. To compound things, we are heading directly into the low morning sun, which was sneaking up on us ahead of all the tightest corners. So I spend the first dozen miles alternating between navigating by guesswork and running with an open visor and streaming eyes. Ahead of me, frantic flipping shows that Fiona is having the same problems At the end of the Anie straight however, the temperature suddenly shoots up by about three degrees – by the time I’ve filled up in Callander, vision is restored and all is well.

Now the meeting. All very worthy and well-intentioned, it being about the future of IAM training and standards. But full of MAMIGs: Middle-Aged Men in Goretex. Now that has to be better than the ubiquitous cycling MAMILs (Middle-Aged Men in Lycra). And, yes, I fall into both camps but, selfishly, at least I’m on the inside looking out. It is though worrying for the future of motorcycling that the room contained about sixty goatee-bearded blokes with a median age of about 55, very few under 40 and, I think, three women. That’s a pretty restrictive demographic and one that I suspect is quite capable of deterring the more extended participation that is both vital to the future and a damn sight more interesting to be part of. It’s also rather different to southern groups such as WVAM, and I’m struggling to understand quite why. 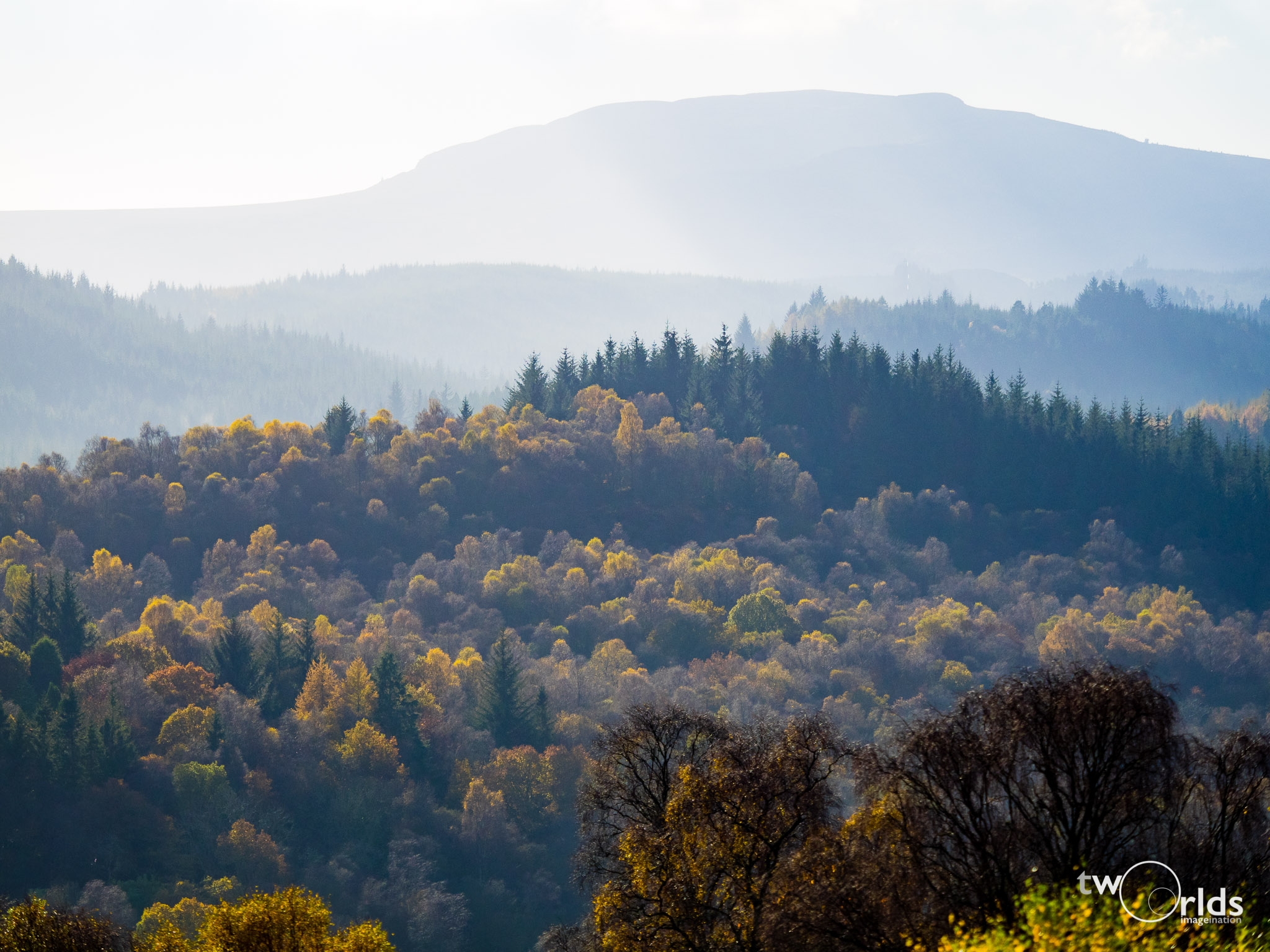 Formalities concluded, I consider the homeward journey. The shortest route is merely scenic and beautiful. The longest route would have me home a week on Tuesday so I go for an intermediate detour, via Thornhill and Aberfoyle, and over the Duke’s Pass. This is one of the most technical roads I know: narrow, twisting and very three-dimensional. At any given moment, you might go from dry, smooth, sunny south-facing tarmac to streaming water, deep potholes and strewn gravel on the north side. This road originally was an 1885 job creation program of an earlier Duke of Montrose, his labourers fuelled with beer. And doesn’t it just show.

On the road itself, the Autumn leaves are mulching nicely: the big leaves from the Sycamores and Chestnuts aren’t so bad, but the fine needles from the Larches create ridges of soggy mischief, a compromise of line being preferable to repeatedly crossing the slime. The surface is in pretty poor condition and will probably count as a bridle path come next Spring, so it’ll be back to pack horses and beer to cross the pass.

I stop at the cafe at Queen Elizabeth Forest Park for lunch and some photography. By now, the temperature is not far off 20°C, astounding for November. So I eat outside, drinking in the view and broiling gently in the warmth of the sun, before carrying on to crest the pass and corkscrew my way down the North side. 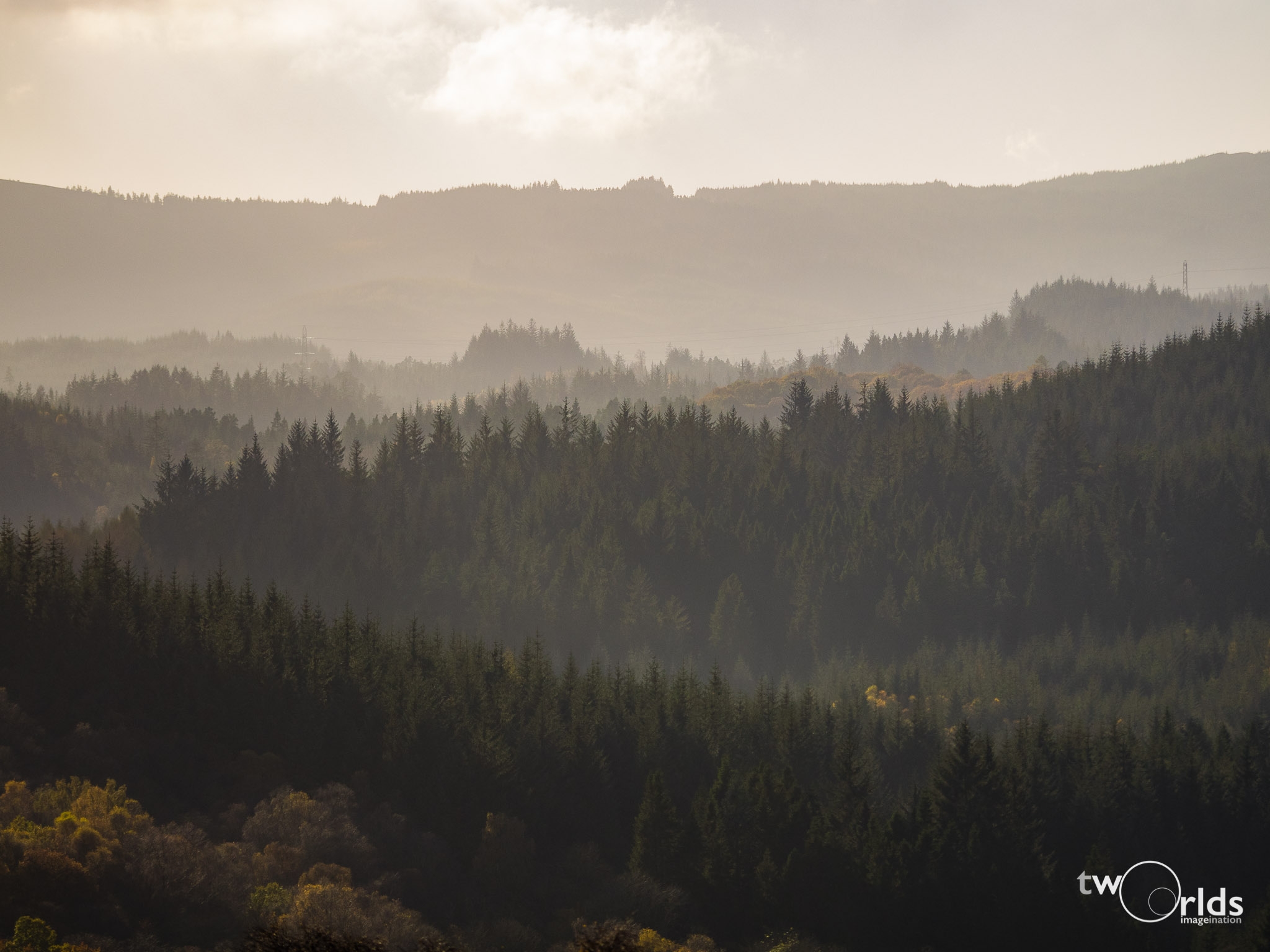 This is very definitely one of those roads where riding faster makes you slower. I’m never out of second or third gear, using the engine braking and throttle sense to set up for bends in advance (or as much as you can when one follows the other metre by metre). Keeping it smooth makes all the difference and you need to resist the temptation to use too much of the road entering a bend: far too many incompetent motorists and over-sized coaches use the Pass and you must expect at any moment that some wayward behemoth will appear, occupying tarmac that you might quite reasonably consider as yours. Being alive rather than right definitely has its advantages though, so caution is the word of the day. Today for once, the cars are reasonably co-operative and I manage to get into a decent rhythm through the myriad curves, which makes all the difference to enjoyment of the moment.
On the final run out towards Kilmahog, I’m picking up speed through the switchback straight and stand up slightly to anticipate a little air off one crest. A BMW GS heading the other way is doing exactly the same thing in the opposite direction and we crest the ridge at the same moment, wheels off the ground and standing up in the saddle. We even manage a synchronised nod in passing. Of such moments are memories made. 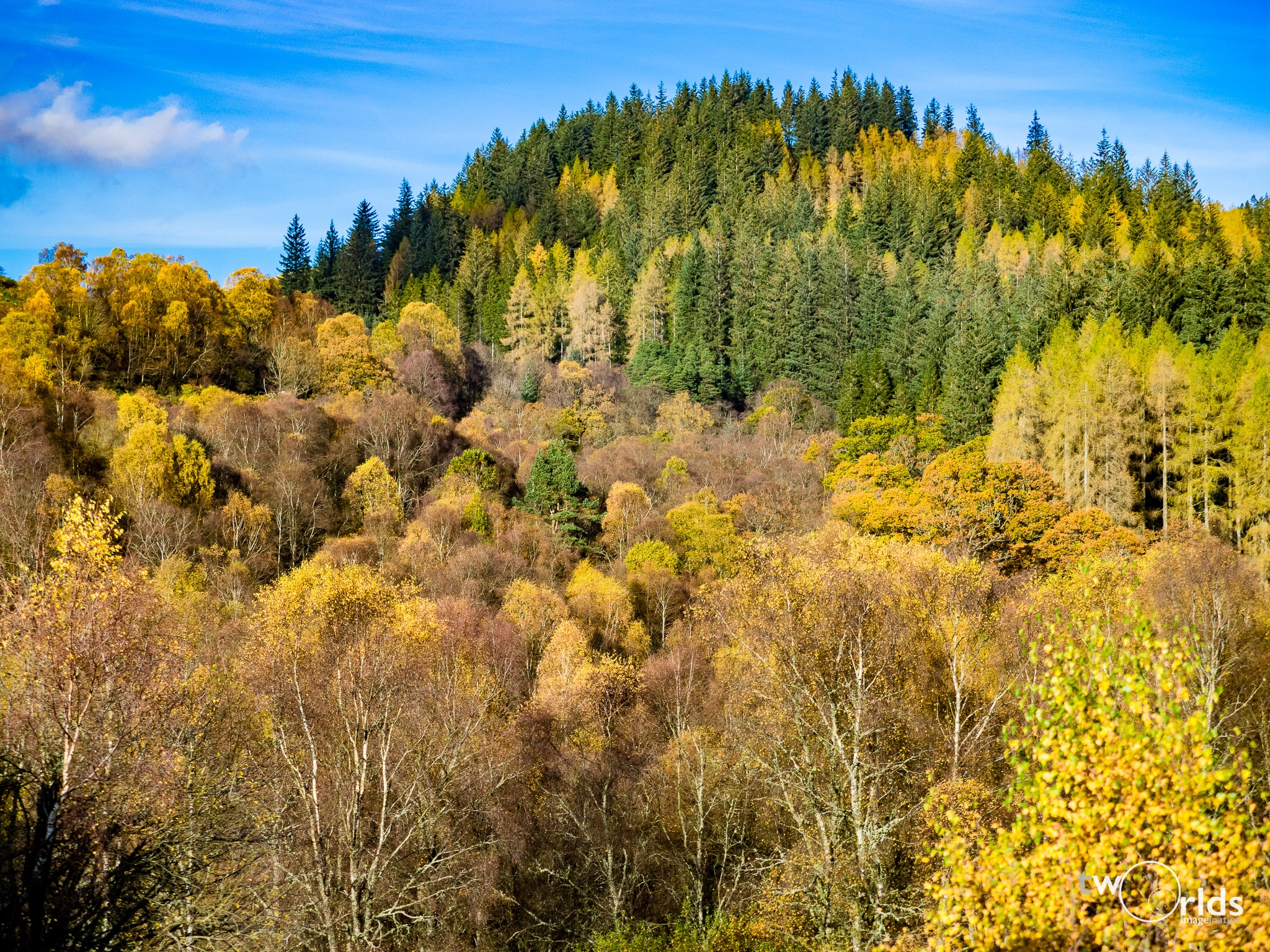 A left in Kilmahog and I’m back on the A84, a road I probably know better than any other. Which means that I need to be more alert, not less, given that familiarity has a nasty habit of breeding blindness. I avoid the usual traps of lurching tourists at the car park entrances on Loch Lubnaig, keep it slower than you might possibly think warranted at the infamous Doctor’s Bend, womble gently through Strathyre and then load the Multistrada’s engine to a rising, hard-edged power drone for a final blast up the hill, cresting the ridge before swooping down towards the turnoff for home. Then it’s back into Enduro mode for a relaxed sashay along the single-track into the glen and home for that most traditional of British drug habits, a nice strong mug of tea.

It’s been too long since I’ve been for a ride for no other reason than the pleasure of the ride and need to make sure I do it more often: it really does restore the soul, especially when the weather and scenery are as awe-inspiring as they’ve been today. But even the foulest weather brings the challenge of focus, of getting it right, of balancing the forces between progress and excess and coming home safely. Which of course is what it’s all about. 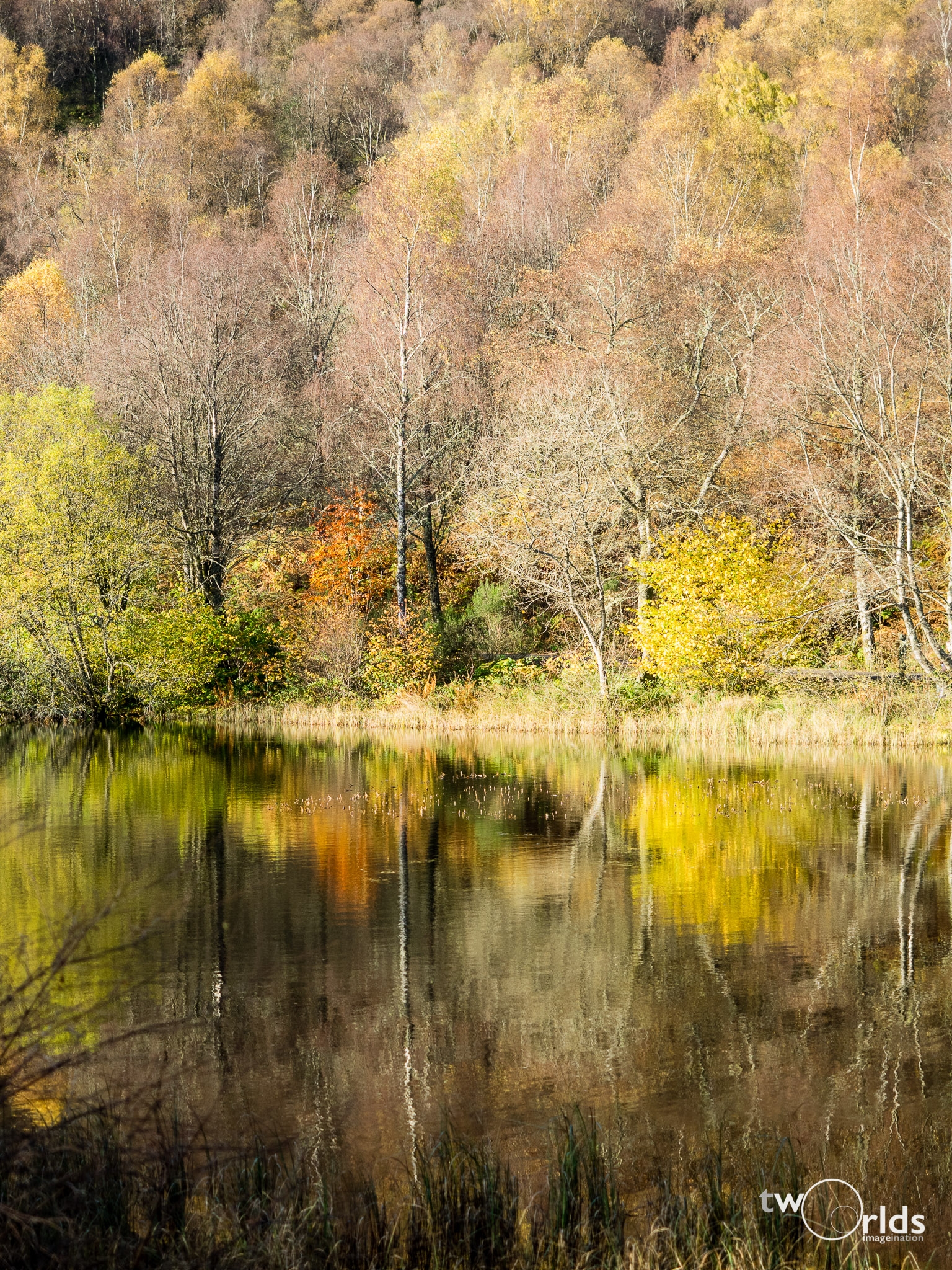